Summary TO AUTUMN by JOHN KEATS 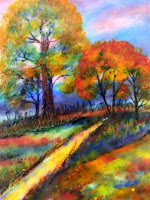 'To Autumn' is a perfect and flawless ode of Keats. It is the briefest of his odes and a purely objective and descriptive poem. There are no personal feelings, no questions, no conflicts. It consists of only three stanzas and the development of thought is perfectly logical and systematic. The first stanza describes the ripe fruits of autumn, the second describes the work of the season and the third deals with its music. The poem presents three complete and concrete pictures of autumn. The poet loves nature in all moods and seasons. He can find beauty even in autumn and even this season can cheer and inspire him.

Autumn is the season of mists and ripe fruits. The ripening sun is the bosom-friend of the season and grapes and apples are filled with ripeness to the core. The gourd and hazel-nuts are blessed with a sweet kernel. Late flowers of summer still continue blooming in autumn and the bees think that warm days will never end and it will be a perpetual summer. Thus in the first stanza, autumn is described as the season itself, doing the season's work. It makes all the fruits of the earth ripe and ready for harvesting. Description of nature is exact, accurate and sensuous. Keats can touch, taste and smell the ripe fruits of autumn. Each line of the stanza is like a branch of a fruit tree laden with ripe fruit.

The first stanza describes the fruits of autumn and the second stanza describes autumn at work in the fields. According to the poet autumn is a goddess in human shape doing the season's work. She sets her hand to all manner of work. Various operations and occupations of the season are described very vividly. Autumn is imagined as the winnower, the reaper, the gleaner and the cider- presses. The picture of harvesting and vintage is complete. Autumn can be seen in the form of a happy farmer sitting careless near the heap of grain. She is the winnower separating corn from husk. She can be seen in the form of tired reaper sound asleep in the field. She is the gleaner crossing a brook with a bundle of corn on her head. She can be seen sitting by a cider- press watching the last drops of apple juice coming out.

The third stanza describes the songs of autumn. In autumn we must not think of the songs of spring because autumn has its own songs and music. In the evening when the fields shine in the light of the setting sun, the twittering of the swallows, the bleating of the lambs the chirping of the birds make exquisite music. The gnats mourn by the river, the lambs bleat from the hill, the cricket sings in the hedge, the robin whistles in the garden and the swallows twitter in the sky. These birds, insects and animals provide the music of autumn and a poet like Keats loves to hear it.
Email ThisBlogThis!Share to TwitterShare to FacebookShare to Pinterest
Labels: English, John Keats, Poems, Summary

Anyone can submit quality notes here and let your hard work spred all over the World. please contact inderdeep01@gmail.com